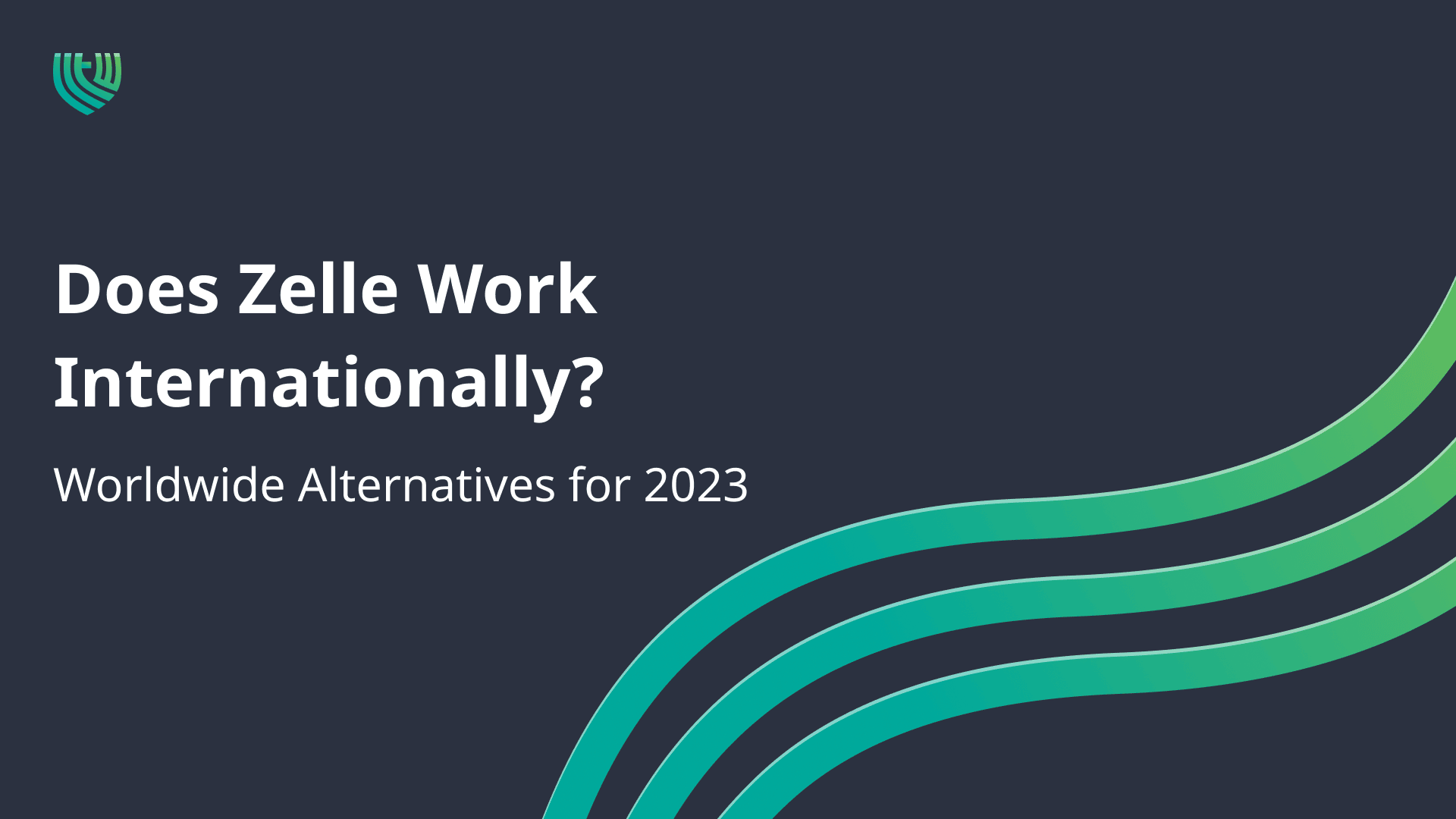 Instant digital payments are all the rage today. Gone are the times you had to wait three or more business days for your money — now you can send cash at lightning speed, all at the tap of a button. Dominating the burgeoning digital payments space is Zelle, an app that allows users to send and receive money directly into their US bank accounts.

Unfortunately, Zelle isn’t available in other countries at the moment, so you won’t be able to take advantage of the payment app’s features if you live outside the United States and don’t have a US bank account.

If you want to send money internationally or receive transfers from abroad, you’re also out of luck — Zelle doesn’t support cross-border payments at all.

In this article, we’ll take a look at Zelle’s availability, expansion plans, and discuss some Zelle alternatives that are available to you if you live abroad.

What is Zelle, and why has the company become so famous in the U.S.?

Zelle is a digital payment network jointly owned by seven banks in the United States to enable cross-bank payments. Consumers and businesses using the network can seamlessly transfer money to other participants’ US bank accounts — instantly and for free — even if they hold accounts at different banks.

What sets Zelle apart is its ability to route transfers directly into a recipient’s bank account — without requiring either the sender or recipient to maintain a separate account linked only to the payment network.

For example, let’s say that you wanted to send a friend some money. Using Zelle, you could transfer funds directly from your bank account, and the money would show up in your friend’s bank account mere moments later. If you used a Zelle competitor — like PayPal, for example, you would first have to fund your PayPal account using your bank account. Once you pay your friend, funds will appear in her PayPal account — but to spend or withdraw the amount, she would then have to initiate another transfer from PayPal to her bank.

So, how does Zelle make money?

Zelle is free for individuals but not for merchants and businesses. Vendors who use Zelle to accept payments for their goods or services pay a 1% processing fee per transaction. Suppose an e-commerce store sells you a pair of headphones for $200 and uses Zelle to process its payments. You pay $200, Zelle takes a $2.00 fee, and the store receives $198 for the sale.

Which countries is Zelle available in?

As mentioned above, Zelle is available exclusively in the United States, and can only send and receive payments domestically.

Notably, Zelle requires both the sender and the recipient to have a U.S. bank account, meaning the app doesn’t support cross-border payments of any type — even those that originate from, or are received by, a U.S. account holder.

As a result, it doesn’t matter where you’re physically located when sending or receiving money. What matters is that you and the other person you’re trying to pay both have a U.S. bank account.

Does Zelle have plans to expand abroad?

Unfortunately, Zelle hasn’t made public any plans to expand internationally at this point. While the app has expanded its user base — for example, by launching support for business and merchant payments in 2020 — it’s not looking to expand its geographic reach for now.

You don’t live in the United States and can’t use Zelle — bummer! Not to worry, though — there are plenty of other payment networks available, many of which offer features similar to Zelle.

Let’s take a look at a few of them. There are several options that will work nearly anywhere in the world:

Formerly Transferwise, Wise is a cross-border payment processer that serves 61 different countries and regions, including all countries within the European Economic Area (EEA). The service offers some of the lowest fees available to a consumer for cross-border payments, making it an attractive alternative to international wire transfers.

A digital bank based in Germany, and its users can send and request money from other users without charges, while they can also invest in stocks, ETFs, cryptocurrencies and commodities.

One of the fastest-growing digital banks. Revolut provides no-fee transactions, low cost of charge currency conversion, and even the possibility to invest in stocks and cryptos.

PayPal allows you to transfer money to and from over 200+ countries worldwide. However, PayPal does charge a fee for international transfers, though the exact amount depends on the country you’re based in and where you’re sending your funds to, along with the size of your transaction and its funding method.

Billed as a cheaper and faster way to send money abroad than via bank wire transfers, OFX is a longtime Wise competitor. The service supports 55 different foreign currencies and 115 kinds of bank accounts across the world.

Primarily built to allow international workers and immigrants to send money to family, friends, and relatives back home, Remitly supports payments from 17 different sending countries to over 100 receiving countries around the globe.

Monese is a digital bank that you can use on your smartphone and is focused around quickly setting up an account while they provide free transfers internationally. At the moment, you can use Monese in 31 countries in the EEA.

A popular digital bank based in Germany. N26 is available in 22 European countries and the US.

This online bank allows for payments within the United Kingdom. They recently launched a US version of the app, though it is unclear if you can send money between the US and the UK.

Like Monzo, Cash App only operates in the UK and the United States. Notably, you can send or request payments between the US and the UK.

Depending on where you live, where you need to send money to, and where you’re receiving money from, some of these payment networks may be more useful to you than others.

If you need to make frequent international transfers to countries in Asia or Africa, PayPal, Wise, OFX, or Remitly may be best for you.

If you’re looking to send money within Europe, Revolut, Vivid Money, Monese, and N26 may be your best bet.

Finally, if you’re just looking to make payments within the US or the UK — or between those two countries — Monzo and Cash app may well suit your needs.

There’s a wide diversity of payment networks out there, even if you live outside the U.S. and can’t use Zelle. Some platforms offer bank-account-to-bank-account transfers. Others highlight low fees and quick transactions. A few networks support worldwide payments, and others primarily serve Europe. With so many different networks to choose from, you’re bound to find one that fits your money transfer needs — whether you live in Europe or elsewhere.

We hope this article was helpful to you! What payment network do you use, and what do you like or dislike about it? Let us know in the comments below!

Other FAQs about Zelle

Can you send and receive money internationally with Zelle?

Unfortunately, not. Zelle only works in the United States.

Can you make payments to someone in a different country with Zelle?

Can US users send money to UK users?

Can you send money from Zelle to Cash App or Venmo?

You can’t. Zelle only supports payments to other US bank accounts. Because your Cash App or Venmo accounts aren’t bank accounts, they’re not supported.

Is Zelle available in Canada? 🇨🇦

Zelle is not available in Canada. Alternatives for Canadian users include Wise and Paypal.

Is Zelle available in Australia? 🇦🇺

Zelle is not available in Australia. Alternatives for Australian users include Wise, Paypal and Revolut.

Is Zelle available in Mexico? 🇲🇽

Zelle is not available in Mexico. Alternatives for Mexico users include Wise and Paypal.

Is Zelle available in the Philippines? 🇵🇭

Zelle is not available in the Philippines. Alternatives for Philippines users include Wise and Paypal.

Is Zelle available in Europe?

Zelle is not available in Europe. Alternatives for European users include Wise, Vivid, Revolut and Paypal.

Franklin is a CFA Level III Candidate with 3 years of experience in Wealth Management as a Fund Research Analyst and the Host of the "Edge Over Hedge" YouTube Channel.